CMHC reported last week House price growth remains elevated in key housing markets in Canada notably the GTA and Hamilton in Ontario. There is not doubt that the current real estate home market has become heated.

TREB stats showing the sales trend since 1980 support the view that the market may be moving into a bubble but is it? We can look at the late eighties where demand, cheaper money, market speculation in particular in the condo market, price inflation and excessive government debt created conditions for a market correction. Canada entered into a free trade agreement with America which started the closing of many branch plant operations in Ontario along with commodity price correction. The recession that started by 1990 resulted in house price collapse lasting for half the decade. Today we have a market that is low inflation, low interest rate, modest economic growth and growing demand  as well as some speculation. Is the precursor to the popping of a market bubble?

Markets run on supply and demand. Current supply is low and demand is high. If supply to the market changes via a economic slow down, much high cost of money, or an market changing event then prices will go down. In the GTA we continue to experience organic demand as noted by  Gary Marr Financial Post August 4 2106  Millennials are not giving up on there dream for a detached home with 51% hoping to own within the next two years.  Millennials also see home ownership as solid investment.  The Federal Finance Minister has changed mortgage rules to make it more difficult to get a high ratio  mortgage but in fact they are only attacking a part of the problem. 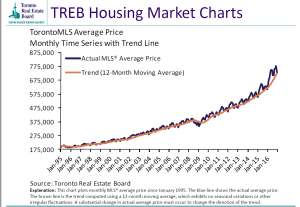 The CBC in a piece on Foreign Ownership (Sep. 23 2016) TREB President Larry Cerqua and OREA president Ray Ferris wrote that a foreign buyers tax will do “little to address the growing affordability challenges facing many Ontarians and may have negative consequences for our broader economy.”    CIBC economist Benjamin Tal said Ontario will have little choice but to implement a tax similar to that of British Columbia. Tal said the main reason behind higher prices around Toronto is a policy-driven lack of land supply, leaving a tax as one of the only levers available to influence the market.

So is it foreign buyers,  domestic demand or cheap money?   As I have mentioned before a big part of the problem is the Ontario government policies on land use, environmental and planning policies have added cost, restricted usage and greatly increased the time to market for new product.  In end there is a supply problem and I do not see how taxing or money restrictions will fix the product issue.   How it will get corrected will impact demand and real estate prices.